skip to main | skip to sidebar

..........'cause TEAM ED RACING blog is part of the Zoo's website (Bike Zoo that is). It's been there awhile but I haven't been into posting much just riding the hell out of some bicycles!! Anywhoo, anything and everything will be there and won't really be all that different. If anything now that I have a interweb enabled phone-type picture-taking device there probably will be posts and pics from the car ride home if not sooner depending on how many Dos Equis happen at Papa's and Beer. So, go there www.bikezoo.com and you will see the Team Ed section. Giddyup.
Posted by gmoney at 12:25 PM No comments:

Sorry for no great updates and/or tales of riding and racing. Been focused alot on the Big One- Shenandoah Mountain 100!! Ed survived North Georgia despite the rain and "fool's gold" laden mud, which turned into a 50 miler instead of 100. Even the pros were worried about survival when most people's brake pads were gone after only 30-ish miles of riding! Since it was two 50 mile laps, and clearly dangerous conditions they shortened the race to one lap. From talking to Ed a good training ride and more importantly no crashes or any significant bike problems because the important race is Sunday! Literally am loading the car to go right now a travel north to wonderful Virginia. No rain, not hot- should be fantastic (it always is)! Stories, pics, etc. next week sometime. GO TEAM ED!!!!!!!!!
Posted by gmoney at 4:08 AM No comments: 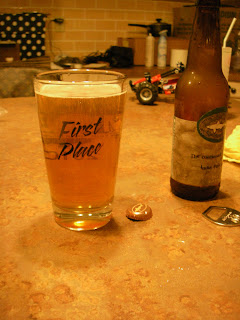 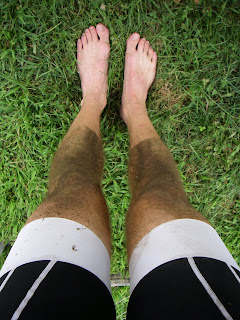 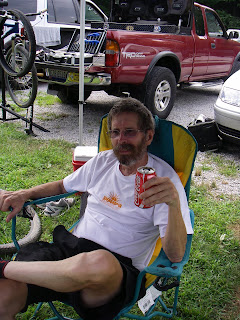 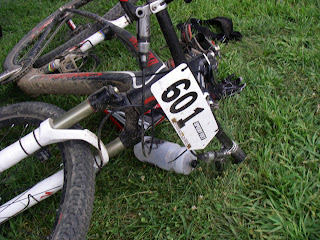 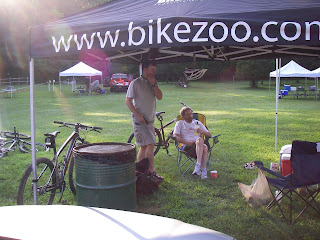 Ran out of time this AM, but here are a few from the race a couple of weeks ago. Mystery guest is Stephen Huddle, former K-town resident, dweller of Cincy now (race was very close for him) and FINISHER of the continental divide race!!!!!!! Holy crap. That is the biggest mountain bike race ever and he did it- awesome!

No report from Ed yet- I'm sure he is fine and there will be a great story or two!

Went to O-HI-O and threw it down on the beautiful, twisty and oh so flat singletrack outside of Yellow Springs, Ohio at John Bryan State Park. Found this race by accident and it proved to be fantastic. Well run, great trails, great food, super nice people and only 25 bucks!! Bonus was that it was only 25 minutes from where Ed's dad lives (yes, he has a dad that is old, but very much alive and kickin'!) Ended up with just under 7 hours of racing, and 91 miles!! (yes, that would be a 13 mile an hour average!) All that work was good enough for first in the SS class and 2nd fastest total time of all the solo guys. Ed rocked the SS class as well and rode 6 hours and ended up 5th!! Other bonus was the weather was perfect- cool in the morning, maybe 80 during the day- and dry trails!!

No blogging, but LOTS goin' on!

Been awhile for lots of reasons the main one being that my family sold our house and bought a new one that we are just now getting ready to move into, so sitting at the computer to do this hasn't been in the front of my brain for sure. But riding has. House stuff happened and then we went to the beach- Gulf coast style and luckily didn't have to swim in oil. House we got was over the top and we had a blast, but the best part was the singletrack. Yes, real-deal twisty fun trails within riding distance of the beach house. I had heard there might be trails and took my chances taking the 1x9 29er mountain bike instead of a road bike and was totally delighted. Rode 4 days and most of those were of the 3 hour variety- largely in the woods. I have some great pics but because of moving all of my crap is everywhere and I can't find the charger for the camera- soon come.

Of course Ed is riding and we even made it to yet another race earlier in July, the Iron Mountain 100k put on by our good friend Chris Scott of Shenandoah fame. Race started in Damascus, VA with a few fast miles on the VA creeper, then into the woods for some fantastic and technical singletrackin!! Because they didn't want people racing all the way back into town the actual mileage was closer to 55 miles but it was still great to go race since for me it had been since the end of May. Doesn't hurt that I won the single speed class and was 12th overall!!!!!! Also, even though he has gotten better, Ed got lost on the course but with his ride back into town on the highway still did the same mileage. There was a questionable spot for finding your way because another friend of ours from Kentucky messed up a potential top 3 spot with the "road crossing" at check 3 ( he still got 5th! ). Great day in the woods and great company seeing as how some of the TVB boyz were in attendance as well- Burgess, Talley, Ross, and "Don" all showed and had a great time.

After that was super fired up for ORAMM and a shot at kicking "dicky's" butt, but was totally shocked that with 2 weeks still to go the event had sold out-no exceptions. E-mailed the race director and even though I've given him my money for the Swank a couple of times and given him ORAMM money and didn't show- he wouldn't let me come. Bummed, but procrastination has come to haunt me over the years and this time got me for sure. Good thing is that I learned something and signed up for Shenandoah yesterday instead of my normal week before, because if I couldn't get in that race I might be depressed for a whole entire year (except I bet Chris would let me in cause he is a MUCH cooler guy). Anyway, Ed fired up a 6 hour race last weekend for something to do (since we couldn't get into ORAMM!!) up near Blacksburg, VA. Should have known it might be interesting when we pulled the course info from someones Garmin data and it said the loop was 4.5 miles with 800 something feet of elevation gain per lap!! Needless to say it was steep in spots, but VERY technical and not the most fun course Ed had ever done, but you never know- that's racin' sometimes the courses are good, sometimes only so-so but it always fun to be in the woods, plus he said it was put on by a bunch of college kids from VA tech. so it was laid-back and fun atmosphere- not like some of the bigger races where there are increasingly bigger crowds (I presume like ORAMM but we didn't get a chance to go).

Looks like there is another 6 hour race up in Ohio next weekend and its on a SUNDAY which is great for me, so we will probably go check it out. Wilderness 101 was so close to happening for me, but we are moving into the new house this weekend so that seems like a good reason to stay home!
Posted by gmoney at 5:12 AM No comments:

ED has been at it again. This time round 3 of the NUE 100 mile series in Michigan and ED's first attempt at the SS for a hundie!! Of course it was no problem as he finished with a time of 10 hours and 30 minutes!!!!!!!!!!!!!! Freakin' stud-boy. I've told him that he could do it and in some ways riding a SS is easier- lots more coasting and when you're pedaling you are moving on, getting climbs over with faster. To prove that the apple dosen't fall far from the tree, Elizabeth (daughter of ED) went back for another go at the Lumberjack and finished ahead of HIM at 10 hours!!! She was on the podium, but I have limited knowledge of all the details as of right now. Very cool stuff.
Posted by gmoney at 6:35 AM No comments:

Last weekend ED traveled to Chattanooga for the Cysco Cycles 6 hour race at Booker T. trails in the 'noog. Hot, hot, and hotter lately (still better than cold and snowy!) made for classic Ed- 5 laps, then some car time sittin' in the A.C. with a bit of "recovery". Turns out, he went so fast on those first 5 he was easily keeping up with the other SS racer- yes he's back on the Al stumpy SS-style (the one with the cool ass zebra stripes). Break done, he rode two more laps much to the dismay of said other SS racer and easily won- by two laps over someone more than half his age and supposedly a "pro" riding for Lynskey!!! I'm starting to think that Ed needs the hook-up, especially because if he likes something he will tell everyone about it and if keeps beating people that are "sponsored" he is most definitely worthy. Next stop for Ed is this weekend in Michigan at the Lumberjack 100, round 3 of the NUE series and will be his first hundie on a SS- go ED!!!!!!!!!!!!!!
Posted by gmoney at 3:58 AM No comments: